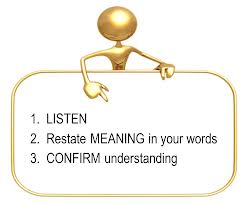 Does this advice work with your LL.M. students?

Paraphrasing, i.e., conveying the same meaning using different words, is (like summarizing) a critical skill for any student in law school. It is frequently expected and requested of international LLM students, yet it is rare for students to be taught exactly how to do it, and even rarer still for students to be provided with opportunities for practice.

Sure, LLM students are often encouraged (or admonished) to “use your own words.” And we typically treat it as something that’s second nature, that you just do. But how exactly do you paraphrase? How did you learn to do it? How do you know how to do it?

The reality is that paraphrasing means having control over the language. And having control over the language involves a variety of facets of the language. Knowing synonyms, but also knowing nuances of words. It also means knowing how to combine or connect those words to create certain effects or implications. Occasionally it means knowing how to use seemingly unrelated words to convey the same meaning. It means being facile with grammar to be able to shift word and sentence order. In other words, it means have some degree of intuitive feel for the language. And that intuitive feel for the language is exactly what non-native speakers lack in varying degrees.

One strategy for teaching paraphrasing is the word-for-word approach. That is, students try to find a different word for each word in the sentence (to the extent they can). So far so good. However, as this often leads to an awkward sentence, the next step I saw listed in a legal English textbook exercise is for the students to review their new sentence and then revise to make it sound more “natural.” This glosses over the crux of the challenge for non-native speakers. If they knew what “natural” looked like, of course, they wouldn’t need the help.

The reality is that there is no magic bullet for paraphrasing. It’s a matter of vocabulary, language development, and practice which in turn is a function of time and exposure to the language.

However, some things you can do to help with that language development include:

In a recent class, I took the following sentence (written on the board by a student in connection with a hypothetical we were discussing):

“He felt so happy because he didn’t have to pay for the broken vase.”

And I asked my students to try to write it using different words. Each student produced a workable paraphrase, but most of them kept the word “because.” One student, however, wrote: “He was delighted that no one would ask him to pay for the damaged vase.” This provided a great example for other students of an alternative way to convey the meaning of “because”. Additionally, this is something they will now notice in their reading which means they’ll pick up a nuance they might not have previously been aware of.

In sum, paraphrasing is often not intuitive for non-native speakers such as LLM students because they may lack a sense of what sounds natural and a certain control over the language. To improve this sense, students need opportunities to genuinely be able to practice paraphrasing. And to benefit from the practice, they need to be working with comprehensible input, i.e., sentences that they fully understand. Because if they don’t fully understand a sentence, then it’s going to be hard for them to figure out how to fully and accurately convey it’s meaning.

Another beneficial element for improving paraphrasing is tapping the students themselves as a teaching resource. In addition to giving them control and ownership over their learning process, their errors, discussions, and questions will also give the teacher a window into their understanding and thinking process with regard to paraphrasing.

Case in point: For the same sentence above, another student’s paraphrase read in part:

“….because he didn’t have money to buy the vase.”

It quickly became clear to me that that student was unaware of how inserting the word “money” between “have” and “to” changed the meaning of “have.” But by having a chance to see and discuss other students’ sentences, he was able to work out the distinction on his own.